In a year where there was a very high standard of applications,  the award was taken out by respected Australian boat manufacturer Steber Craft.  The Birdon Group took out Commercial Marine Service Provider Award with their work to secure the supply of Bridge building boats to the US Armed Forces.

“It is an honour to receive this award in such esteemed company, the variety of the type companies applying for the awards shows the growing strength of the Australian Commercial Marine Sector.

We thank the panel for recognising the great work the team has done in the commercial sector this last year, with this award.  Our work in the commercial sectors continues to grow with new work with Australian Border Force, SEMAR (Mexican Navy), US Navy, Royal New Zealand Coastguard and the continued support from our existing customers, like Sarawak River Board and the fine volunteers at Marine Rescue NSW.” 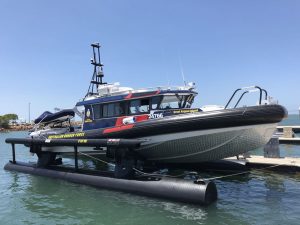 AirBerth is the Proven Choice for commercial users around the world as it:

Winning this award is a major shot in the arm leading into the Sanctuary Cove International Boat this year and has given AirBerth a lot of momentum moving forward.