Whangaroa is located in the Northern Region of the North Island of New Zealand a remote area in the country’s North. 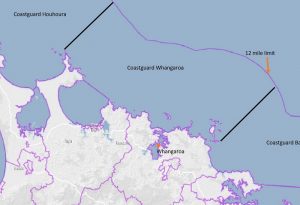 “The operational area for Coastguard Whangaroa is from Matauri Bay at the south eastern end of the Cavalli Islands and west to Berghan Point and out to the 12 mile limit.  This is an area of roughly 374 sq. nm (1240 sq.km) consisting of open Pacific Ocean and many miles of rugged coast line and islands with one sheltered harbour area.”

“The majority of the operational area has relatively deep water and the coastal areas are isolated rugged coastline with generally steep inaccessible cliffs.   The coastline is directly exposed to weather from the northwest to east.”

With a very exposed and isolated coastline in the North-East, the MV Kahurangi is built to withstand severe weather conditions up to Force 7 on the Beaufort scale.

Given the remote location at Whangaroa, access to haul out facilities were quite far away and costly.  In addition, this remoteness meant that during maintenance the vessel would not be availble for operations for an extended period.  Thus, reducing the maintenance shedule and maximizing availability for deployment was identified as a priority during the development of the business case in 2014. 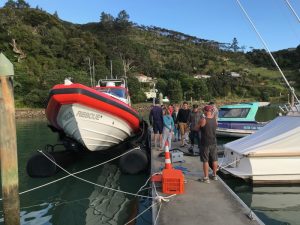 The unit then begin investigating ‘out of water’ storage options for the Kahurangi.  Having previously trialled a drive on system, the unit then decided on an AirBerth with the:

cited as a major benefit to this rescue unit.

“Being about to retrieve and stow the boat in minutes with the AirBerth has been a major plus to the crew of the MV Kahurangi, particularly when we come back to port at 3 am  in the morning after a rescue.”  Bob Kidd, Unit President – Coast Guard Whangaroa.

Out of the water

Installed by AirBerth Distributor Paul Johnson from Poly Tech, the M650 is the 2nd unit installed with Coastguard NZ, following the M320 for Hibiscus recently. 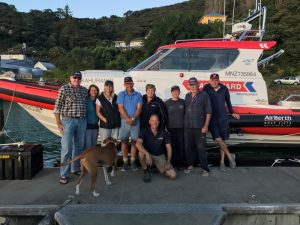 “This was a tricky AirBerth install, due to the remote location, however, we were up for it!” – Paul Johnson from Polytech NZ our Exclusive AirBerth dealer in New Zealand.

AirBerth Boat Lifts are proud to support Paul and the good people in Coast guard NZ who volunteer their time and expertise to help make the coast of New Zealand safe.